Conference on the non-competitiveness of the European Union 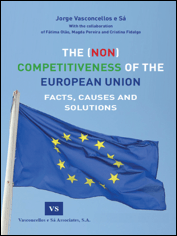 On February 16th, 2017, a large business association organized a conference on:

The (Non) Competitiveness of the European Union

Before an audience of 200 managers, Professor Jorge Sá and the Presidents of four other European think tanks, presented the facts, causes and solutions, for the gap between Europe and the USA in GDP per capita (33%), productivity per employee (22%) and per hour (13%).

Professor Sá’s conference was based on his book “The (non) competitiveness of the European Union – Facts, causes and solutions”

Professor Sá is the President of Vasconcellos e Sá Associates, a Drucker expert, an economic freedom speaker and an European competitiveness speaker and expert.

His conferences are based on books endorsed by Peter Drucker (founder of modern management) and Philip Kotler (founder of modern marketing), the two Nobel prizes on behavioral economics (D. Kahneman and R. Thaler), and the practices of the best managers in the world (Bill Gates, Steve Jobs, Jack Welch, Alfred Sloan, Andy Grove, Helmut Maucher, A.G. Lafley, among others).